Since 2014, I have not been able to walk properly. I can try, but most times I have to lean on someone else to walk. On Saturday, we were doing maintenance work in preparation for my son’s wedding for this last Thursday. When my older brother saw the sea rising higher than normal, he alerted me. He knew I’d take a while so he said I should get going. He packed a few things as I left. I barely made it to the main road when my brother and nephew caught up with me, grabbed each arm, and helped me move faster. By that time, a wave from the West had made its way to the main road. Now, the volcano is on the North Western side of our island. ʻAtatā’s map is like a tennis racquet. The wider part is where our plantations are. The handle is where we live. When the waves came, it split on the wider and higher end of the island, came east and west, and met up right in the middle of town where most of us live. The first wave I saw was about 7 meters. It came and collapsed right at our house, destroyed it, and flowed straight to the other side of the island. My brother and nephew quickly helped me up a wild hibiscus tree as we waited on the wave to subside. My older brother left to get boys to carry me while I stayed with my nephew on the tree. Then there was this interval with no wave and the ocean ebbed. My nephew said maybe we should get down and walk uphill. We did that when a call came for my nephew to help our other relatives. A mother, her daughter, and an elderly grandma were also trying to get to safety. I held on to the granddaughter, my niece ʻElisiva while my nephew helped the grandma. We all hurried on when I saw my brother coming back. Suddenly, he jumped up a cement water tank and yelled, ʻHold on to a tree!’ Tolofī and her elderly mother hid behind a water tank. As for ʻElisiva and I, it was too late. 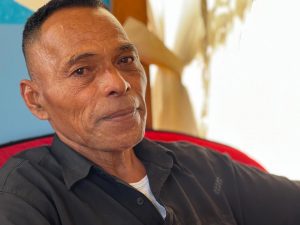 Another 6-7 meter wave came from the West and collapsed right in the middle of the main road. The current from that wave was up to our waist. It swept me and ʻElisiva away and drove us apart. I was taken east where waves from both sides twirled and tossed me to and fro. As I couldn’t use my feet, I only pushed myself up with my hand to breathe. I did that about 8 times. As I went down the 8th time, I told myself my next one will be my last and that’ll be it for me. As I came up to breathe one last time, a tree floated right by me and I grabbed it and held on tightly. That was around 7pm. I heard the village search party then and my son was one of them. He called my name 4 or 5 times. My life was in extreme danger and I needed the help. But I could not for the life of me, answer my son. I knew if I say something, he will try to get to me and our lives will both be in danger. Better to lose only one than two members of the family. As he continued calling my name, I floated silently in the dark and cried. But I can also assure you, I trusted in the God I worship that He would help in my hour of need. I said, ‘God, would you forsake me at this hour?’ Another big wave came and took me further away from land. It was this time that I felt the raining dust. That whole night I was just talking to my God. My family and children were also constantly before my eyes. I was ready to accept whatever God had for me. At around 4am, I felt that I was getting close to land and saw the shadow of an island. At dawn, I was on the reef of Toketoke, the island closest to Haʻatafu. When I made it to the beach, I sat down and again talked to my God. ʻPraise thee God, I’ve made it here. But I am still in the vast ocean. Will you walk with me once more? 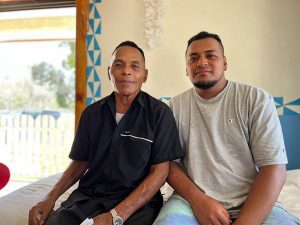 I was on a boat full of people from Nukuʻalofa to ʻAtatā when the volcano erupted. Father told me to bring a light bulb for one of our rooms so I hopped on the boat to bring it over. We were in the deep when we saw the smoke rising. When the big eruption occurred, the waves got bigger. One look from the waters told us our island was in great danger. The town officer who was also the skipper, offloaded the ice blocks and the heavier stuff so we could get home faster. He told me to look out for people who would be swept away and to call him if I see anyone. When the raining dust came, we were close to shore. As soon as we landed, we ran to find family members. My prime concern was my father who can barely walk and his older brother. Uncle said my father was already swept away. I went around with a torch in waist-high waters to look for him. In doing so, I found almost everyone who got swept away except my father. I assisted an elderly woman to safety. I heard there were two more so I went down again and found Vai. She was clinging to a tree by the seashore and was stuck there. When the others took her up, the wave lowered and out of nowhere, ʻElisiva grabbed my leg underwater. I carried her uphill. All this time, I called out for my father. He had taken me fishing in the deep waters since third grade. He taught me young not to fear the ocean. I knew if he answered me, I would’ve gone without hesitation. But by Sunday, he wasn’t found. I turned every log on the beach and grabbed every coconut in the ocean hoping I’d see him. My uncle convinced me to return to Tongatapu. I pushed the boat from shore and was the last to get on. At Nukuʻalofa, most people offered their condolences. By Sunday evening, our extended family decided we’d hold a memorial service for my father on Thursday— the day my wedding was planned for. 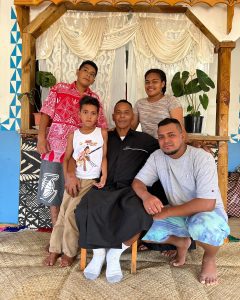 It was around 8am on Sunday when I saw the Police boat on its way to ʻAtatā. I found a piece of fabric on a tree branch and waved. No one saw me. After a while, they returned. I waved again with no luck. The next thing to do was to evaluate my environment and my capacity to help myself. Other chances of assistance were slim to none. Haʻatafu was close by and so was ʻAtatā. My predicament was the deep waters in between. I couldn’t possibly swim across with only two hands. Poloʻa, the area close to Hōfoa, was the farthest from me. But I knew that area was all reef and then seaweed all the way to Sopu. Shallow waters would be best for my physical abilities. I left Toketoke around 10am. A piece of plywood helped me to float while I used my hand to paddle. The plywood covered my neck to my waist, protecting it from the corals. As for my feet, they were dragged all the way over the reef. For me, the urgency was making it back to ease the worrying burdens of my family. My sister is highly diabetic. My youngest daughter has heart problems. What’s the point of coming back alive if my disappearance caused death within my family? That thought propelled me and I asked God for more strength to keep pushing. At dusk, I made it to Poloʻa. People usually fish there so I called for help. None came. It dawned on me that people fled the day before and weren’t back yet. Calculating the distance from Poloʻa to Sopu, I told myself once more, I’ll make it.

At around 10pm Sunday night, I was at Paula Fukofuka’s shore at Sopu. Low tide was approaching as I crawled on the sand from there to the shores across the Ministry of Fisheries. Using a piece of timber as a cane, I crossed over calling someone or anyone for help. I was hoping a security guard or staff would be there but no answer came. People had evacuated. Back on the main road, a vehicle passed by then it turned around and came back. I asked the driver for a phone just to call home. As we chatted, Sione Pālavi—the driver—realized I’m the one man from ʻAtatā that the government was out searching for. Pālavi helped me to his vehicle and drove me to my sister’s house. My family had just finished devotional and decided to hold a memorial for me. In a kava circle there, friends and family talked of me. Pālavi got off the car and called out a few times, ‘Come get your boy’…’Your lost lad is here.’ When no one came, he asked for my name, turned on the light then he said, ‘Ko Līsala eni, mou haʻu ʻo ʻoatu.’ The cry of relief, joy, and perhaps despiration reverberated as everyone ran over to embrace me. It took a while to respond because they didn’t know if I arrived dead or alive. There in my soaked shorts and singlet, we sat on the doorstep and humbly expressed in prayer our ultimate gratitude to our God. Now, we don’t talk of injuries or inabilities, we just count blessings. The stories and rumors have spread. But I hope that when people hear my story or talk of me, that they also talk of Jesus. For He alone helped and healed me even in my imperfections. Some say I’m just a skilled fisherman or I was well-acquainted with the area. Others think I’m a courageous man. But I tell you, no amount of courage or strength in me would compare or even begin to withstand the might of God manifested in nature. I pray that people would speak my name as a symbol of divine mercy and grace granted by God through this, our miraculous journey. I know I’m spared because He still has a lot for me to do.