With your support we are changing lives around the world 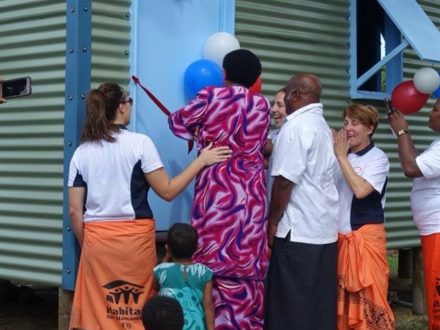 Peni & Ivinei
In 2018, Peni Waqa and Ivinei Tinai moved into a cyclone-resilient Habitat home. Peni told us what it was like in their old house. “There were lots of holes on the old tin roof and on the side walls as well. Water used to come in the house and our things got wet. We had no choice but to manage with the situation. Receiving this house is a blessing which I thought would never happen.” The couple, both in their 60’s, even helped with minor construction work while others in the community were trained in safer construction techniques. “Life was hard for us but I never gave up. I had the hope that something good will happen to us.” 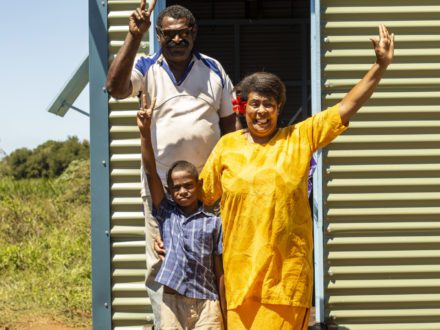 Our Global Village team traveled to Fiji to build a strong and stable home. Global Village Build Fiji 2019
In September 2019, a Global Village team traveled to Fiji to build a strong and stable home for a family living in substandard conditions, in a flood prone village during cyclone season. The team was made up of employees from our partner Home NZ, and Wright Wire Electrical, led by Habitat’s Benjamin Ross. Together, a new home was built in just one week and the lives of the family have now been transformed with safe, reliable and resilient shelter. One of the biggest challenges to housing in the Pacific is the constant threat of extreme weather. A decent place to live means a home prepared to withstand a tropical cyclone. Jessica Cooper, Co-Owner of Home NZ shared her experience of the trip: “The first week of September 2019 a group of eager, big hearted people embarked on a life-changing adventure to the beautiful Island of Fiji to be a part of a Habitat for Humanity build mission. Before the building began we met the Dratabu Village Chief and received the blessing to break usual village protocols to allow construction on the land. We presented some kava root as a gift to the chief. This would be prepared for the celebration on the final build day when the house was officially presented to the family. At the build site where we got stuck into induction, hard hats and gloves and then onto digging. Lots of digging! We met the family we were building for and we learned of their story and experienced their warmth, positivity and gratitude, which was humbling to say the least. By the end of the day two we had a floor and four frames up. A satisfying achievement given the usual construction time frames we experience in NZ! After four massive days of construction, we finished up at 6.30pm exhausted, emotional, covered in paint and dust but running on hyperactive excited energy and laughter! We took every posed photo possible with the family in front of their now completed physical expression of our service and love, which we lovingly named ‘Vuvale’ – Fijian for Home. Day five was dedication and celebration day. We arrived on site in mid morning and met with the family, the Habitat team and the local minister to bless and dedicate the home. It was then presented to the family, who cut the ceremonial ribbon on the door and celebrated the ownership of their first home. I left Fiji feeling extremely full of love and gratitude, for the experiences I had had and for the beautiful people i had met. I am so grateful for the experience of which I will never be able to forget, and never want to again take for granted the simple luxuries I live with every day. I’m not sure who was richer for the experience – the family who received the home, or me.” Our vision of a world where everyone has a decent place to live doesn’t end with building houses. It’s about fostering resilience and self reliance, so communities are empowered and prepared in the face of future disasters. Builds like this show us the impact that safe and reliable shelter has on a family’s well-being, strength, and resilience. 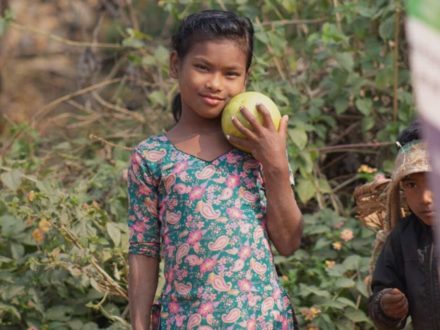 Rita's mud and brick home collapsed in less than a minute. Rita
When the devastating earthquake struck Nepal in 2015, Rita’s mud and brick home collapsed in less than a minute. Only ten years old at the time, Rita had to abandon her ancestral home and move with her parents and two siblings into a makeshift shelter with walls made of plastic sheets and a corrugated metal roof. Rita and her family did not expect that this would be their home for the next 4 years – their flimsy one-room shack having to withstand the rain, thunder, and lightening during the severe monsoon seasons. The prospect of moving into a safe and permanent home became a distant dream when Rita’s mother Kanchi fell ill, and all their earnings went towards medical bills. In September 2018, Rita’s dream of living in a proper home was made possible with help from Habitat for Humanity Nepal, and Global Village volunteers from New Zealand, the USA, and Germany. Rita’s father Kale worked side by side with Habitat and volunteers to cement the brick walls of his new home. The family moved into their finished home just nine months later. For Rita, the most positive change is feeling safe inside her own home. With a strong and stable house, Rita’s mother Kimchi was able to recover from her illness. Cambodia Big Build 2019
In November 2019, 90 volunteers from New Zealand, the US, Canada, Hong Kong, Korea, Australia and Portugal took part in the Cambodia Big Build. The build aimed to raise awareness and support for the importance of having decent shelter through building strength, stability, and self-reliance. Mark Berryman, a long time supporter of Habitat for Humanity New Zealand, led the team of Kiwi volunteers. Volunteers worked alongside nine Cambodian families, to build safe and decent housing in Sambour village, Pouk district, constructing 9 homes in just 4 days! All the families moved into their new homes on the final day of the build. One of these families was Sai’s.

Sai’s old family home (right), and her new family home (left). For new homeowner Sai, feeling safe and secure made all the difference. Her old thatched house had no door. “Before, whenever we heard strong rains and winds, my children and I would get out of the house and stay in the field until it stopped,” said Sai, a 32 year old labourer. Now, she and her family can stay indoors when the weather gets worse. What’s more, her daughter and son can now study comfortably at home. Sai says “both are studying hard.” The volunteers’ efforts were recognized by Ly Samrith, Siem Reap’s Deputy Governor. By partnering with the families to build new homes, the volunteers were helping to reduce the future homeowners’ living expenses, he said. Siem Reap, in the northwest of Cambodia, attracts over 1 million tourists annually to the Angkor Archaeological park. Nonetheless, it is among the poorest provinces in Cambodia, according to a 2011 government report. Habitat for Humanity has been working in Siem Reap since 2007 to improve the lives of about 20,000 families through affordable housing, clean water and safe sanitation. Habitat Cambodia’s Bernadette Bolo-Duthy said “working to improve the housing conditions of vulnerable families will in turn allow them to build their resilience against disasters, and help create an enabling environment that sets them up to develop further.” During the build, the homeowners’ enthusiasm was matched by the volunteers’ dedication. Pictured below, volunteers celebrate as they dedicate the homes to their new owners, a moment they are sure to never forget. Text and image credit: Habitat for Humanity Cambodia 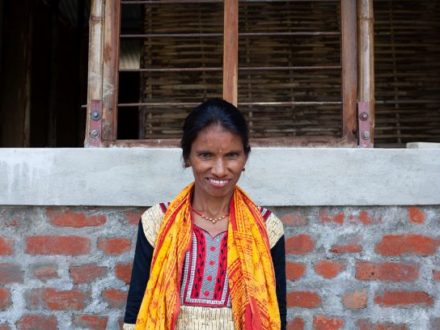 Kala lost her family home in Nepal during the devastating floods. Kala
Kala Lamgade and her family lived on the banks of the river Bring, and lost their home due to the devastating floods. Surviving on daily earnings of Rs.350-500 (approx $3.50 – $5.00) as a labourer, Kala did not earn enough to support herself, her 5 children, and extended family members. She made the heart-wrenching decision to send her three eldest children to work before they completed their schooling. But even with the combined family income, Kala’s family could not afford to rebuild a safe, strong home. Habitat worked alongside Kala, offering a pathway to strength and stability. By bringing together the community, government agencies and other NGO’s, Habitat is able to serve families like Kala’s who couldn’t easily access support otherwise. Watch the clip below to see what having a decent place to call home means to Kala, her daughter, and other families in their own words.

Mareko and Lutise's home was badly damaged by Cyclone Gita. Mareko and Lutise
Mareko and Lutise Savelio Mapu worked with Habitat to develop stability and self reliance after their home was badly damaged by Cyclone Gita. The roof had been blown away and the family were forced to live with Lutise’s parents in cramped conditions. Mareko, a carpenter, gained confidence in disaster-resilient construction techniques after working with Habitat and partners to repair his home. He now has future plans to extend his home with the new skills he has learnt. Samoa has been victim to a number of devastating extreme weather events over the years. We are providing crucial training so communities can better identify shelter risks and work to identify and action solutions, while providing communities with the skills needed to rebuild safe and resilient shelters. There are so many families in need of decent housing in Samoa, but we need your help to reach them. This is what Habitat means when we say through shelter, we empower. This work is making an impact in Samoa.
Support Habitat for Humanity New Zealand
Support Us