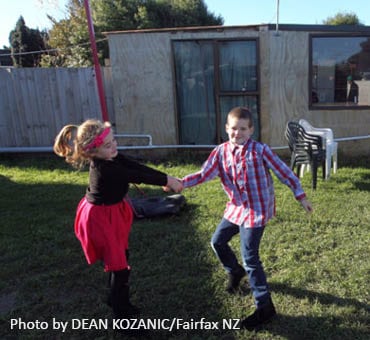 Eighteen months living in a shed are finally over for Karl and Sari Fisk and their children. The Christchurch couple was handed the keys to the brand new Kaiapoi home they helped build themselves and have moved in this July.

The family is one of 21 in Canterbury to receive a house courtesy of Habitat for Humanity’s Hand-up Christchurch project. Sari Fisk said the family was just managing to pay the rent on their former Hoon Hay home. When the rent increased by $40 a week after the 2011 earthquake, it was just too much, despite both she and Karl working full-time, she said. The family made the decision to move into a 15 square metre shed out the back of a relative’s Linwood house.

Everything was squeezed into the shed. It was partitioned into three areas, two bedrooms and a living space. There was just enough room for their beds and they used the bathroom in the relative’s home. Sari and Karl looked forward to a bit of privacy. In the shed, there was no such thing as a “sleep in”, Sari said. “We don’t have a doorway so when the kids get up and put the television on, everyone is up,” she said.

The Fisks were selected from 54 applicants after an HFH information evening. They will pay 30 per cent of their combined income to HFH for 10 years, then the house will be theirs.