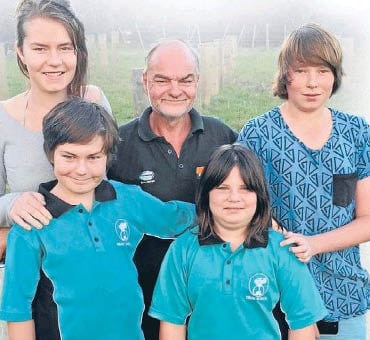 After years of struggling, single Tirau parent Terry McLean is looking forward to his family’s future, beginning with a warm winter in a home built by Habitat for Humanity volunteers.

The past five years have been difficult for Terry and his children Jeremy (9) and Jessica (8), and step-children Jennifer (17) and Jordan (15). Their mother and Terry’s wife Michelle passed away in 2011 after a battle with acute myeloid leukaemia.

It was her wish that Terry and children move closer to his extended family in Tirau. They found a house to rent, but it’s been damp, cramped, cold and without working fireplaces. It’s also for sale.

The family of five are now part of the Habitat assisted home ownership programme, and will soon move in to a new basic four-bedroom home. It was built at the University of Waikato by volunteers during orientation week and will be transported to its final spot in Tirau in April.

“Now we can actually stay in one place and we can start planning – I can put money aside and not worry about whether we’re going to have to move. It’s a weight off my mind – it’s going to be ours,” he said.